It might have seemed that the worst moments in Megan’s journey to escape a violent relationship came during the first three weeks, when she and her teenage son lived in their car in a McDonald’s car park.

But it was actually 12 months later when she reached her lowest ebb. The aftershocks of her decision to leave were continuing to reverberate. Problem after problem compounded. Her initial hope that it would take six months to return her life to ‘normal’ had proven to be a mirage.

‘That’s when I began to feel…not like ending my life…just like getting in the car and never coming back. Because it seemed it would be easier simply to not be here,’ Megan says. 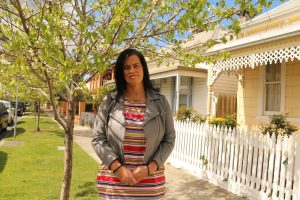 As a New Zealander who had no access to social security payments, Megan had endured a violent marriage for years. She had decided to wait for her children’s education to be complete before making a move.

Megan also had major health issues to manage, having survived a serious battle with two different forms of cancer, which means she is dependent on a feeding tube for much of her nutrition.

But just at the point when her son was completing Year 12, the violence escalated, and this time her son was also a target. Megan and her son fled their home with just the clothes they were wearing.

She had to enlist police help to return to their home the next day and grab their belongings – including her son’s school uniform and Megan’s essential medications. She hooked up her feeding equipment, and kept her phone charged, through a power point at McDonald’s.

Even when accommodation was finally available, there were battles with an ineffectual court system. Her husband broke the intervention order 13 times, including an occasion when Megan had to barricade herself inside the house.

There were seven moves in two years, reliance on food vouchers, skipping medications just to get through each week, and at times a crippling loneliness while struggling to get the right help.

Throughout the following two years, Megan was also dealing with legal problems. She represented herself in family law proceedings; with great tenacity, she taught herself – via Google – how to issue a subpoena. But the biggest burden she was carrying was a $12,000 overdraft debt. On the very day Megan finally fled the violence, her husband had withdrawn the entire amount from an account where Megan was a joint signatory.

Though she negotiated a $20 a month repayment plan with the bank, even that amount was onerous given the family’s precarious situation.

‘You don’t realise how much being in poverty makes everything cost more,’ says Megan. ‘You can never get a discount for paying bills early; I could never afford to connect to the internet. I used the free Wi-Fi at McDonald’s just to get by.’

Several months ago the family came to Melbourne. ‘You lose your life again with each move,’ says Megan. She rang 12 different organisations trying to get help, and was turned away at every point as not eligible, as she was by now technically not ‘homeless’ or ‘facing family violence.’

The phone call she made to McAuley turned her life around. ‘McAuley had all the pieces of the puzzle to give us the right help. We were finally referred to specialist counselling, which has made a huge difference to us processing what we went through. And we were connected to WEstjustice for the legal mess I was dealing with.

‘That bank debt which had caused me years of sweat, tears and stress was taken off my hands, and then solved straight away. The dread of those phone calls when I missed a payment was gone at last.’

Slowly, with all the pieces of the puzzle finally being addressed, the lives of Megan and her children are coming together. Megan herself is completing a Bachelor of Arts degree.

Reflecting on all she has learnt over the last three years, Megan says: ‘We got through, but we shouldn’t have had to fight like we did. For so long we were in limbo. You can’t move on with your life, unless everything is connected.’