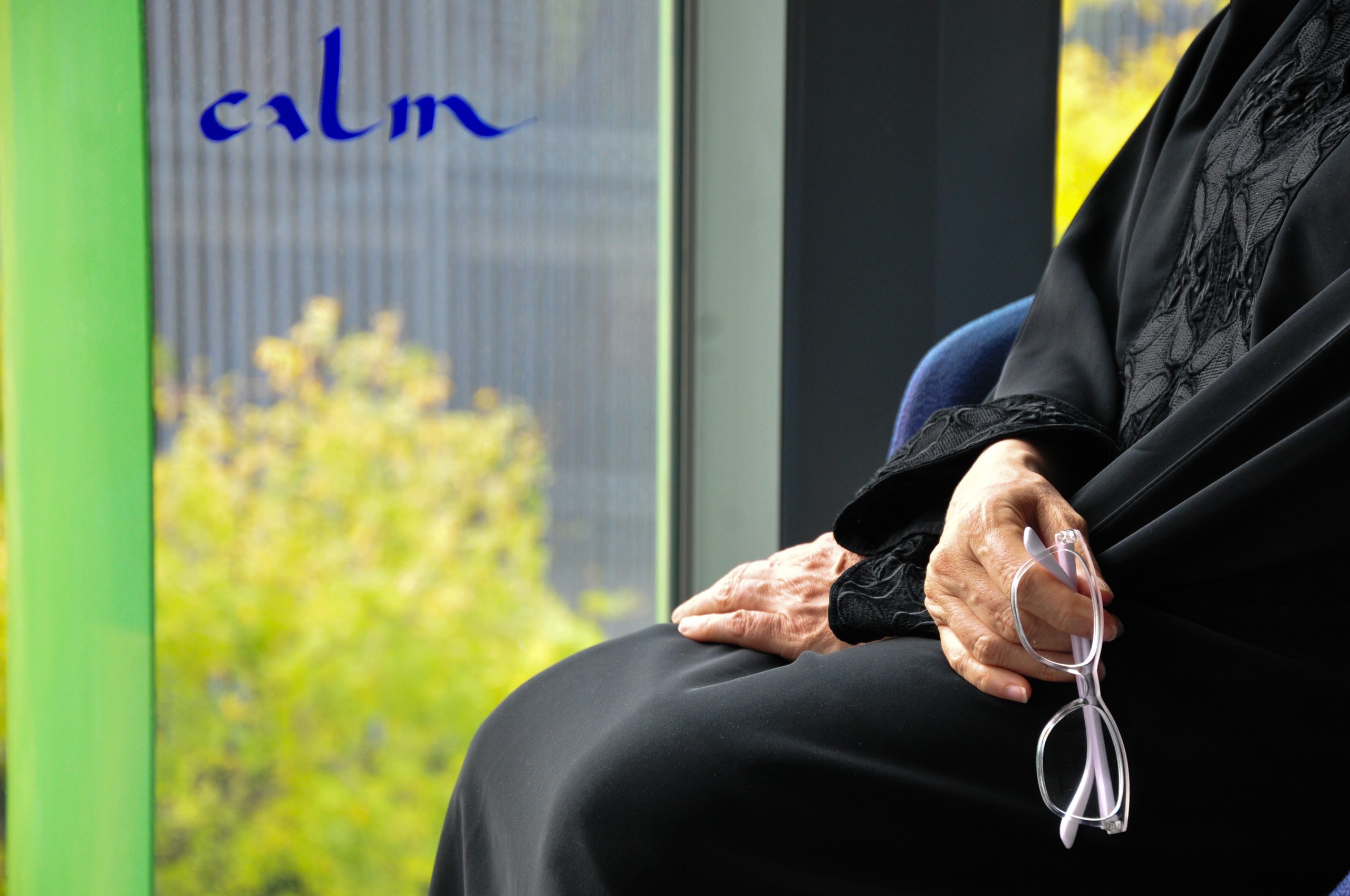 As a child, Alia* remembers scrambling over fallen neighbours in an apartment stairwell as they rushed to escape to a shelter. Sometimes she and other children would look out across rooftops, trying to pick the buildings that would be hit by bombs before they landed.

She was seven, she recalls, the first time she saw a person dead on the street.

Much time has passed since living through, and escaping, two wars with her family. While the memories are clear, the fear that she feels now comes from a more recent trauma.

Alia is living at McAuley House where women who have survived family violence and homelessness are supported to rebuild their lives. She says it is only with the knowledge that there are three locks between her and the street, and someone looking out for her 24/7, that she is starting to feel safe.

Working closely with her caseworker, she is taking part in programs and refusing to give in to depresssion.  She is resourceful and committed, but she knows recovery will take a long time.

‘I have it down,’ Alia says, ‘so that in my room I put my awards, my family photos, my personal photos  and my photo with my kids – everything positive around me to remind me who I am and to feel secure.’

Alia’s phone tells the story of her very different lives. She scrolls through the images.  Here she is living the life of a successful company executive, with silky hair and designer dresses.  Here she is bungee jumping, and here is a shot of her glossy sports car.

Then there are dozens of images, documents, and texts that Alia feels she cannot delete – despite them reflecting a time when she feared for her life – because they are needed for her legal battles.

By far the most numerous images on Alia’s phone are those of meals she has created. They are amazing, colourful, gastronomic delights that make you feel hungry just looking at them.

She hasn’t seen her children, who were born overseas, grow up.  One day, while she was at work, her first husband took them to his home country where her custody rights were denied.  When she became loud and tearful outside his parents’ home after being refused a visit, she was told the military would be coming for her and she should leave.

For more than a decade, Alia held out hope that she could be with her children. She avoided serious relationships because she didn’t want them to discover she had another family if they reunited.

She threw herself into her work, committing herself 12 hours a day, six days a week, and for a while it was enough. Then, after twelve years of a luxurious but lonely life, Alia decided she ‘just needed a warmer breath on the pillow’ and began searching for happiness on Marriage.com.

A single father from Australia came to meet her overseas, impressing her family as a ‘generous, smart, funny and … easy going’ man, and marriage followed.  Alia told her disappointed boss, ‘I am closing a life to start a new life’.

While she arrived in Australia with lots of clothes and gifts, she saw herself leaving the pressure of her working life behind for a simpler, more fulfilling one.  As part of that, she would choose to wear a hijab, and to prioritise time with her new husband and his children over an immediate return to work.

She saw no reason to worry about his access to the savings she brought with her.

Her husband’s controlling nature emerged slowly.  She would leave the house alone for a walk and soon find him walking beside her, telling her not to talk to anyone because they could be dangerous.  When something was needed, he would buy it or take her to buy it.

While he had been her ‘Romeo’ when they first met, relations in the bedroom changed.  ‘It was always as he wants, the way he wants and the time he wants and once he’s done, he leaves.  So you are married and you feel this cold inside of you,’ Alia explains. ‘It’s hard when your lover becomes your enemy.’

After a few months of giving her money, he stopped. ‘He would say to me:  “The pantry is full; you don’t need money”,’ she recalls.

He made her delete social media and conversation apps from her phone, stifling conversations with others, and dismissing her attempts to talk to him about matters important to her.

‘He would say: “You have the right to have an opinion, but in the end, my opinion will work and that is what is important in life” and I would say to him, “Oh I see, so it’s my way or the highway?” and he would say, “No, it’s my way; there’s not even a highway”.’

Alia was accused of being childish and exaggerating about the pain when he pulled her hair, slapped her or kicked her.  He would threaten to have her residency visa cancelled.

She would feel a chill after they had been fighting when she realised he had brought his gun into the house, catching the profile of it as he purposefully moved close by her.

In a conversation that would finally bring her into contact with family violence services, her husband once revealed to someone that he had put recording equipment in almost every room.

The fear continued when she realised the hotel accommodation that she was allocated was just 15 minutes from the house she had escaped. For six weeks, she slept fully clothed with a cutlery knife beside her pillow, forcing herself to use her food vouchers in local shops only when she was overwhelmed with hunger.

When she first arrived at McAuley House, Alia stayed in her room because, she explains: ‘I was afraid, I was shy and I wasn’t digesting what was happening yet.’

The move to McAuley has brought with it changes, big and small – catching the bus for the first time in order to retrieve belongings from a warehouse, and finding her way to the Food 4 Life program, run by a dietitian whom Alia describes as her ‘partner in crime’.

The program is run in a commercial kitchen adjacent to a communal dining room and rooftop garden at McAuley House. It’s designed to improve women’s relationships with food, with mealtimes often at the centre of good and bad memories, and unhealthy eating habits sometimes resulting from abuse or loss.

For Alia, the joy she felt in cooking came from those who appreciated it.  Her father used to tell her he loved the food she brought him because she brought it with love, so it was a new experience to have her husband complain about smells while she prepared meals, and comment on what they lacked while eating them.

Asked what the Food 4 Life program could provide for someone like her, she says:

‘If you have all the skills but you don’t have the people, one hand can’t clap.  She (the Food 4 Life facilitator) makes you feel confident, sure of yourself, and feel freedom … So the kitchen, I love it and I work from my heart and the women are happy.’

Some of the images of food on Alia’s phone now include those she has sent her son from the McAuley House kitchen.  She hopes her daughter, who does not remember her, might one day appreciate a meal cooked with love in her company too.

How to earn an income is also on her mind, so she is working with her employment coach from McAuley Works, a Jobs Victoria funded employment program.  She knows her skills would support retail management, but she might also consider becoming a chef.

‘I’d like to cook, but also to have a story with the people I am feeding,’ Alia says.  ‘I’m happy with the ladies here and what they have.  When you look at their faces and see how happy they are, it means you have put a joy in their eyes.’

An independent life is calling to Alia.  Since coming to McAuley, she can see it and begin working toward it.

‘Since I left his house, the safety, the humanity – I saw it in the people here,’ she says. ‘McAuley is the right place at the right time for me now.’

*Not her real name

Update: Alia is now happily working in an administrative role with the John Holland Group, where she has impressed her employers.  One of those who assessed her suitability noted: ‘Even before the interview was over, we knew we could stand back and she would get things done.’

With determination that she is becoming known for, Alia says she is ready to ‘start from scratch’ in building her career again, because ‘failure and giving up are not in my dictionary’.

Find out more about Food 4 Life and McAuley Works

Employment puts Salina ‘back in this world’ after family violence

A rewarding job that makes all the right connections