But it was a ritual that meant a lot to Amrita*. It signified another huge step in her transition: from a woman who’d lived with the terror of family violence and endured physical assaults during pregnancy, to holding a role as a popular and respected employee.

Our employment support service McAuley Works assists women such as Amrita to find and get a job – a way out of violence and a chance to build a new and more secure future.

Amrita’s caseworker Lorraine says: ‘In my first meetings with her she was still in a state of fear and anguish. She’d lived in refuges and there had been countless intervention order breaches. She also had two young children and was still traumatized and uncertain about what the future could bring.’

Amrita has a degree in accounting, but she was totally committed to getting any kind of work. When a job opportunity as a receptionist/administration assistant arose, she wasn’t put off by the fact that it was an hour’s drive from her home. She aced an interview in McAuley’s Boardroom and a week later was offered the role.

McAuley’s support didn’t end there. Lorraine picked her up for a practice run from home to work, mapping out the best routes, train station, and traffic timings. Amrita was thrilled when they arrived at her new employers to find that it was right next door to a Sikh temple. ‘It was meant to be,’ Amrita says, asking Lorraine to come into the temple with her.

‘It’s fair to say it was a successful day all round,’ Lorraine says.

Amrita started in a 25-hour a week role, welcomed with open arms by her new workmates. It didn’t take long before she was promoted to full-time Office Manager. Her colleagues held her in such high esteem that they sent her flowers to celebrate. Not long after it was Amrita’s birthday, and she prepared a cake to celebrate her milestone with her workmates. 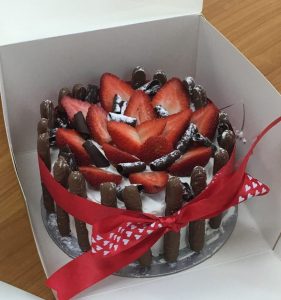 The birthday could have been a sad one. Her husband attempted to ruin it by sending her the divorce papers the day before.

There were tears from Amrita but when the day arrived she asked herself: ‘Why should I have to be sad?’ Seeing that her children were, as kids usually are, happy and excited, she says she ‘dared herself to celebrate’…and concentrate on how much her life had changed and a new feeling that she was ‘blessed.’