Tania: 'I saw no future for myself' - McAuley Community Services for Women
Homelessness

Tania: ‘I saw no future for myself’

Safe and secure accommodation and a place to call home was a turning point for  30-year-old Tania who has been homeless for the past two-and-a-half-years.

Tania is now living at medium term accommodation provider McAuley House, a new service in Ballarat to support women who are homeless or at risk of homelessness on their journey to recovery.

Since moving in , safe and secure housing with a support network of staff is giving her the space and resources she needs to get her life on track. 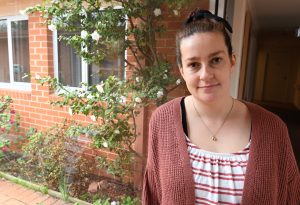 Tania is now into her second trimester of a Graduate Diploma in Professional Writing which she is studying online with Deakin University and hoping to complete with the help of a scholarship by the end of the year.

She is sharing her story as a message of hope to other women to not give up, while raising awareness of the complex issues contributing to homelessness.

Tania grew up in Dimboola, a small town north of Horsham with her mum, step-dad, two older brothers and a younger sister.

She described it as a rough and socially isolated childhood with family violence and not much engagement in the town.

“School was my saviour,” Tania said.

“The only thing I really enjoyed doing was going to school. I always wanted to be a teacher as long as I can remember. My siblings were always my students growing up. As they got older they started paying me to do their homework.”

After completing year 12, Tania moved to Bendigo and spent the next four years completing a Bachelor of Education at LaTrobe University. Her first teaching job was at her old secondary college in Dimboola, before spending two years teaching at Charlton College and two-and-a-half years at St Arnaud Secondary College.

Stress build up, combined with mental health issues, and alcohol abuse lead to a suspension from teaching by the Department of Education.

“The stress and everything had gotten to me by that point,” Tania said.

“I was drinking a lot and relying on prescription medication. They found out I was drinking at school during the day and then I just started not turning up to work.”

Tania moved to Geelong to live with her sister before living in a share house. It was after making friends with the ‘wrong crowd’ that her drug and alcohol addiction worsened. Spending all of her money on drugs and alcohol and not leaving anything to pay rent led to an eviction from the share house. That was the beginning of Tania’s experience of homelessness.

With nowhere else to go and no help offered by crisis support services, she was told to find somewhere safe to park and sleep in her car.

“I don’t think I really saw much of a future for myself,” Tania said.

“I guess at the time all I really cared about was how I was going to get alcohol, where the money was going to come from and when my next drink was going to be. I had stopped caring about anything else really. I had pushed all my family away by that point.

“I drank so I didn’t have to think about anything else. I slept on and off and had a knife with me at all times out of fear of being in my car.

“It got to the point where I had spent all my money and didn’t have any left to buy alcohol, so I did an armed robbery at a bottle shop in Geelong.”

Tania was arrested and imprisoned for a few days before it was decided she was too mentally unwell to remain there. She was on bail for more than 12 months in Ballarat living with her brother’s ex-partner, then her brother, then at short-stay accommodation provided by Berry Street.

The court sentenced her to a 12 month Community Corrections Order and no jail time due to severe mental health concerns.

Tania said the mental health pressure had been building for years.

“I never really recovered from getting suspended from teaching,” she said.

“My entire life was teaching so having that cut off, I was pretty lost.

“Having to rely on family after being so independent my whole life, then having to rely on other people was really hard. I became a lot more depressed and was in and out of the psychiatric hospital in Geelong constantly. There had been several suicide attempts.

“I didn’t have the mental health support I needed. I got pushed around from one worker to another and was never able to form a bond with any of them. They didn’t really know what to do with me. They kept saying ‘you were a teacher once upon a time, you’ll be fine’.”

While now on a more positive path, Tania’s journey continues to be challenging as she experiences ups and downs in her mental health.

But she said the biggest change that has helped her get her life back on track has been secure housing and increased support.

She said McAuley House offered so much more than secure housing. It provided a support network with staff in-house during working hours, a social network and a sense of safety that allowed a positive view of the future.

Tania said she would likely be able to tell a different story about her life had she received effective mental health support and been able to find stable accommodation sooner.

“I was quite depressed and really unwell so I think had I have gotten some proper support at the time things might have been quite a bit different now,” she said.

Tania said she would likely be able to tell a different story about her life had she received effective mental health support and been able to find stable accommodation sooner.

“I was quite depressed and really unwell so I think had I have gotten some proper support at the time things might have been quite a bit different now,” she said.

Tania said there needed to be more services like McAuley House.

“The other thing needed is better mental health support. That really wasn’t good enough for me,” she said.

In the long-term McAuley House Ballarat is working with Mercy Place Ballarat to create opportunities for residents.

Staff are also working with City of Ballarat to establish secure affordable and accessible housing for residents to move in to after they leave McAuley House.

Tania’s focus now is on completing her studies and getting herself well while also building her skills with volunteer work at Mercy Place.

Living at McAuley House will enable her to continue that focus and reach her goals.

“Now I am starting to see a future for myself. I am able to start planning ahead and thinking about my career,” she said.

“At the moment even to think about going out and renting a house means I have to get a job on top of studying and that is not really realistic for me at the moment.

“Living here does take the pressure off so I can focus on one thing at a time. Once I am finished my course and have a job and am feeling more mentally stable then I can worry about getting my own accommodation.”

Tania’s message to other women who are struggling is to not give up.

“I tried to give up so many times and it kept making my journey even harder and the recovery even longer.

“Reach out and accept other people’s help. I tried to do it by myself for so long. I wanted to keep that independence and was too stubborn to reach out and ask for help. I probably could have got help before living in my car but I was too proud to ask. I am learning now there are people who genuinely do want to help and they can help, so let people in.”

This story was written by Rochelle Kirkham from The Ballarat Courier and an edited version reproduced with the kind permission of Rochelle and  The Courier. Photography courtesy of Lachlan Bence.

Employment program helps Beth to break a cycle of homelessness